Tom Ward finally has to face the thing he has been dreading, he has to defeat the Fiend by sacrificing Alice.

Gregory is there to help, but he is feeling his age. Grimalkin thinks she may have found a way to defeat the Fiend without sacrificing Alice. When Grimalkin and Alice go off to work on that plan, a new Mage appears and he derails everyone's plans. This was an engaging and interesting story. The story is expanded quite a bit and some new characters are introduced. The main one is a Mage that is evil and mysterious.

His appearance in the story starts the next storyline that will be dealt with in The Starblade Chronicles. I enjoy Tom as a character, he has more and more powers appearing as he unlocks his heritage both as the son of a lamia and as a 7th son of a 7th son. He does get a bit whiny at points in this story though, something that was new for him and not at all fun to read.

My favorite character of the novel continues to be Grimalkin. She is super tough and really fights for what she believes in, she is just such an awesome character to read about and she is in the story quite a bit. Alice isn't in the story a lot and she was one of the biggest disappointments for me in this book. Her character takes a turn that I didn't enjoy and I was disappointed in the direction things took with her and Tom.

I won't say a whole lot more of that because of spoilers. This book is much darker than the rest of the series more along the lines of I Am Alice, which was also darker. It is very violent and there is a lot of heartbreak and betrayal. I continue to really enjoy the epic struggle between light and dark that takes place in these books.

This book really shows some shades of grey as well, since some dark characters are forced to band together with the good in order to fight an even greater evil. Some people have complained about the simplicity of the writing style, I don't think that has really changed. Delaney has always had a somewhat stark and simplistic writing style I believe all the books in the series have been like this though and I enjoy it because it's a style that makes for good classic storytelling, which is something Delaney excels at.

Although I still love the characters and the story, my biggest disappointment was the lack of resolution. Yes, the main plotline the destruction of the Fiend is wrapped up. However, so many new elements are thrown into the story that the Fiend's destruction felt a bit anti-climatic. The reader is really pushed towards new things mainly story elements that were revealed in the earlier book Slither and isn't given a whole lot of resolution for any of the characters.

Overall I really enjoyed this book a lot but there were a few disappointments too. I was really disappointed in the lack of resolution and in the direction Alice is taking as a character. 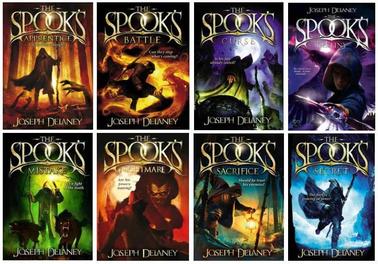 I continue to enjoy Delaney's excellent storytelling, the illustrations throughout, the interesting characters, and the epic struggle between light and dark. I will definitely be reading The Starblade Chronicles as it releases This is the final book in the wardstone series, like the rest of the books, it's a good vs evil book with a twist.


The final battle is here but who actually wins. Obviously if you have read the other 12 you enjoy this book. Here at Walmart.

Your email address will never be sold or distributed to a third party for any reason. Due to the high volume of feedback, we are unable to respond to individual comments. Sorry, but we can't respond to individual comments. Recent searches Clear All. Update Location. If you want NextDay, we can save the other items for later. Yes—Save my other items for later. No—I want to keep shopping. Order by , and we can deliver your NextDay items by. The Spook and his apprentice, Thomas Ward, deal with the dark. Together they rid the county of witches, ghosts and boggarts.

But now they have unfinished business to attend to in Priestown. A creature he has never been able to defeat. Together they rid the county of witches, ghosts, and boggarts. In this third and terrifying instalment in the Wardstone Chronicles, the nights are drawing in and it's time for Tom and his master to move to Anglezarke, the Spook's winter house. Tom has heard it will be a sinister and menacing place but nothing could fully prepare him for what he finds there. The fourth instalment of the Wardstone Chronicles. In Pendle the witches are rising and the three most powerful witch clans are rumoured to be uniting in order to conjure an unimaginable evil.

Together they will be capable of raising the dark made flesh - the Devil himself. Tom and the Spook need to set off for Pendle to avert the unthinkable. But before they go, the Spook tells Tom to journey home and collect the trunks Mam left behind for him. But what dark family secrets are contained in the trunks? As danger increases in the County, Tom is sent far north by his master to be trained by Bill Arkwright, another Spook. Arkwright lives in a haunted mill on the edge of a treacherous marsh and his training methods prove to be harsh and sometimes cruel.

But he has toughened up many previous apprentices, and now he must do the same for Tom. But when the Fiend sends his own daughter, the ancient and powerful water witch Morwena, to destroy him, Tom finds himself facing his enemies alone. As the Spook's apprentice Tom's first duty is to protect the County from the dark.

But now Mam needs his help in her homeland of Greece.

One of the most dangerous of the old gods, the Ordeen, is about to return there, bringing slaughter and devastation. Meanwhile, the Devil himself is still loose and if he and the Ordeen join forces, a new age of darkness will descend. Mam has summoned a powerful group to her side but among them are Tom's old enemy, the Pendle witches, including the assassin Grimalkin, and the cunning clan leader Mab Moldheel. With his precious library of knowledge destroyed, they seek refuge on the nearby island of Mona. But with Mona in the thrall of a twisted Shaman there is little respite from hostility or denizens of the dark.

And as Alice dodges the ever-tightening net of the island's witch hunters, a more deadly enemy emerges. Bony Lizzie, escaped from the Spook's bonds, has grand ambitions of taking the throne. The only thing protecting Tom and Alice is the fragile and precious bloodjar. They must remain together and the jar intact - otherwise they are both at the mercy of the Fiend himself.

Meanwhile Tom is recruited to tackle the evil mage alliance, on a mission which ultimately leads him to the possession of the Spook's Blade. A sword with a dark side and a thirst of its own for blood I am Grimalkin, and I have already chosen those I will kill Grimalkin has made it her lifetime ambition to destroy the Fiend, avenging the brutal murder of her son. Having grudgingly joined forces with the Spook and his apprentice, Tom, and assisted them in the binding of the Fiend, she is now on the run. And her mission is deadly. She has to help them bind the Fiend's spirit for ever no matter who - or what - comes after it.

Time is running out for Thomas Ward. His final battle against the Fiend is drawing near, and the Spook's apprentice has never felt more alone in his task. Isolated and afraid, the Fiend is set to send the greatest of his servants against him - Siscoi, a Vampire God more ferocious than anything he has yet faced.

Tom must risk his life to prevent the evil beast from entering this world, even as he learns that the final destruction of the Fiend may involve a sacrifice more terrible than he can imagine…. Far from the Wardstone, a new darkness is rising. Slither is a haizda mage who preys upon humans, drinking their blood to feed his dark urges. But then the farmer offers him a deal, and extracts from Slither a promise that will take him on a journey to the City of the Petrified Tree, to a fallen star-stone that holds great power, and straight into the path of Grimalkin, the Witch Assassin.

Dark and scary things I hoped I had left behind for ever Over the years, Alice has fought evil side by side with the Spook and his apprentice, Thomas Ward. But now Alice is alone — in the realm of the dark.